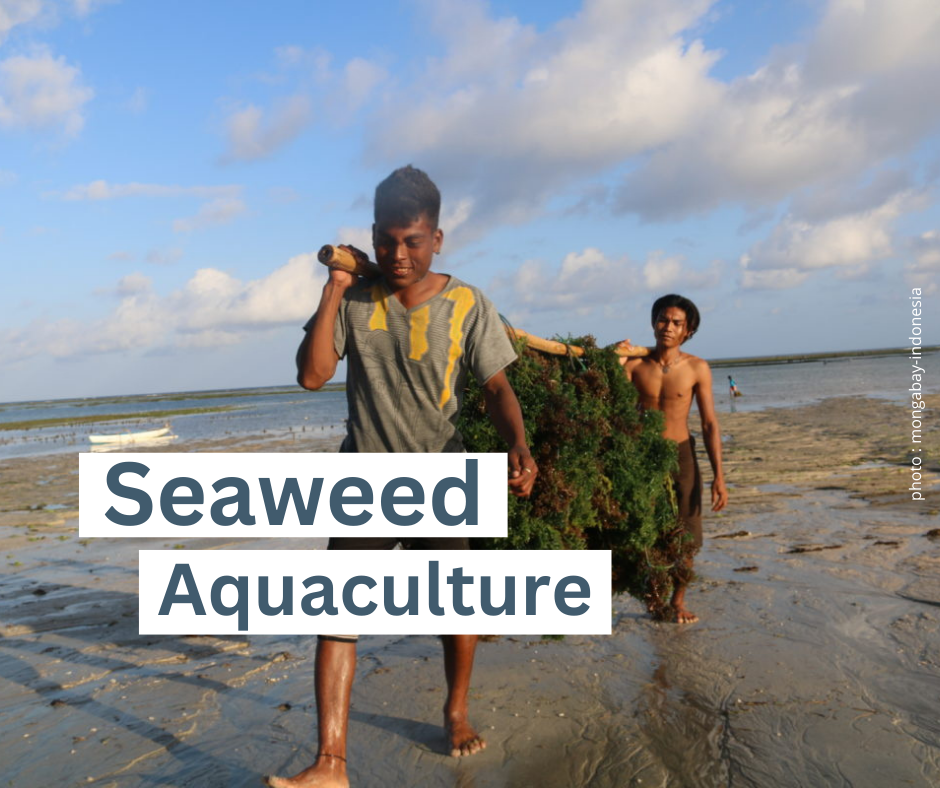 Seaweed farming provides an opportunity in remote areas where coastal communities face a limited number of economic alternatives. It was a major contributor to wellbeing and livelihoods for them. The production systems used for seaweed are accessible to smallholder farmers because of their relatively low establishment and operational costs, simple production system, short production cycle, and the cultural acceptability of the practice.

Seaweed farming is undertaken in much of the Indonesian archipelago, ranging from West Java through to Maluku and East Nusa Tenggara provinces in the east. An estimated 267,000 households benefit from seaweed farming in Indonesia, with the average mariculture farm size varying from about 0.1 ha in Bali to 1.0 ha in South Sulawesi (Rimmer et al. 2021).

How many times need to harvest the seaweed?

A typical culture cycle of seaweed is about 45 days, after which the seaweed lines are brought ashore, the seaweed harvested, new propagules tied on, and the culture process repeated. There are some environmental factors effect seaweed growth rate, such as water temperature, sunlight, salinity, nutrients, acidity levels, seed size and genetic material, sedimentation, water oxygen levels and disease infection.

Those also can affect the process production and harvest result. Reported by theconversation.com, seaweed production changes through the seasons and almost seaweed is grown in the first half of the year (a case study of the mainland coastline of Pangkep in South Sulawesi).

These are two common seaweed farming methods in Indonesia

Related topic: Sea-farmed Supercrop: How Seaweed Could Transform the Way We Live

According to research by Rimmer et al. (2021), seaweed farming in Indonesia comprises three main value chains. These are the points:

How is cost and benefits to do seaweed farming?

The average capital cost for a seaweed farm in Takalar Regency, South Sulawesi, Indonesia was estimated to be IDR 8,300,000 (USD 590; IDR14,000=USD 1.00.), and the estimated payback period for this investment was estimated to be a little over three months. This amount was used to purchase aquaculture infrastructure (main ropes, small ropes, and buoys), seaweed seeds and for payment of operational costs. The main operational cost was seeding (tying on of new propagules), accounting for 28% of variable costs. Revenue:cost (R/C) ratios for seaweed farming reportedly range from 1.5 to 2.6 in South Sulawesi, from 0.96 to 21.0 in Southeast Sulawesi, and from 3.3 to 3.4 in Maluku (Rimmer et al. 2021).

All aspects of the production cycle, including the production of seedstock, are simple and can be done either on the farm (cleaning the seaweed lines, harvesting) or onshore in the village (removing the seaweed from the culture lines at harvest, and tying on of new explants). Culture methods used by Indonesian seaweed farmers vary but are all based on simple and cheap technologies and materials.

After harvest, the farmers will deliver and ship the seaweeds to the suppliers as the raw materials or processed it before into various product such as hydrocolloids or another commercial product.

Farming More Seaweed To Be Food, Feed And Fuel

A University of Queensland-led study has shown that expanding global seaweed farming could go a long way to addressing the planet’s food security, biodiversity loss and climate change challenges.

a week ago
Join our Newsletter